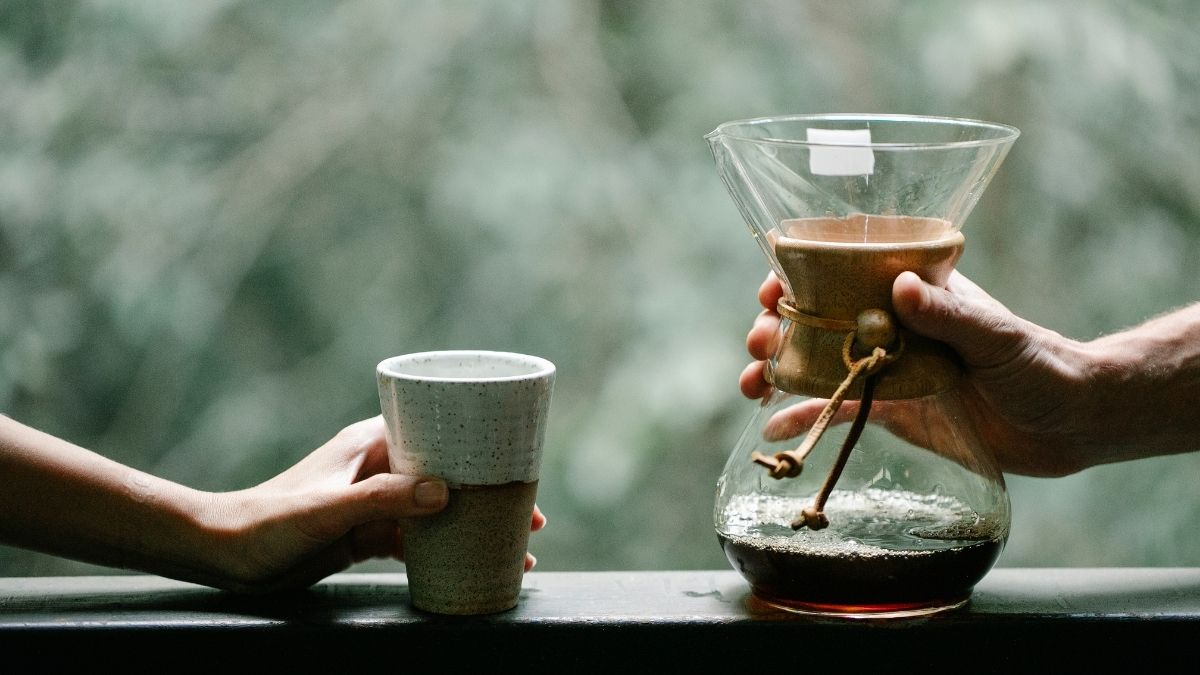 The Chemex is a coffee brewing device commonly-known for its unique design. It’s characterized by an hourglass-shaped glass flask, similar to what you’d see in a laboratory. Alas, due to its eccentric structure, it can be challenging to choose the right Chemex size for your specific needs, much less use it. While it’s mostly up to personal preference, Chemex enthusiasts believe there’s an optimal size for this device.

If you’re in the market for a Chemex machine, it’s best to get an 8-cup model. This option should be large enough for a group yet also small enough for one or two individuals.

At least that’s what most people think.

But if you’re an eccentric, the standard options may not fit your style. With that said, this article will discuss several points that may help you decide which is truly the best Chemex size for your needs.

What Are The Available Chemex Sizes?

Chemex comes in four different sizes, and people refer to these sizes using “cups” as a unit of measure.

Read on for a breakdown of each Chemex size and what they may entail to you as a consumer:

The 3-cup model is the smallest possible size for a Chemex. It’s commonly referred to as a single-serving size as it can typically only brew up to one pint or 16 ounces of coffee.

Take note that the device’s dimensions (e.g., height, width, length) may vary from brand to brand, but their brewing capacity will always remain the same according to their “cup” size. This size is perfect for those that live alone in their homes but may have insufficient capacity to accommodate multiple individuals at once. There are, however, several merits to choosing a 3-cup model over other sizes.

One, you can store it in a backpack, making it the perfect size for campers, hikers, or adventurers in general. Two, it takes minimal effort and time to set up, so it’s pretty convenient. Most importantly, it’s the most affordable Chemex you can find on the market since, obviously, it’s the smallest.

The second smallest Chemex size is 6-cup. This model has a capacity of up to 30 ounces of coffee, which is slightly lower than the capacity of an 8-cup model. Unfortunately, this isn’t the type of Chemex you can carry anywhere as it’s a bit too bulky. It can, however, accommodate two to three individuals, as it should have enough capacity to brew three to four cups of coffee.

The 8-cup model, also known as the standard Chemex size, is supposedly the perfect size for coffee makers, and for good reasons. To start with, it has a capacity of 40 ounces and can brew six to eight cups of coffee.

This means it can accommodate an entire group of people. Furthermore, an 8-cup model typically accepts two filters simultaneously, meaning you can brew coffee faster. Perhaps the only downside of an 8-cup model is that you may struggle to set it up due to all the components comprising the device.

This model has a capacity of up to 50 ounces, which should be enough for ten cups. Interestingly, the 10-cup model is most commonly-bought by those who like their coffee black and strong. While it’s true that its redeeming feature is its size, you’ll rarely get into a situation that may require 50 ounces worth of coffee. Therefore, the 10-cup model isn’t any more popular than the smallest Chemex size, the 3-cup model.

If you live alone, the 3-cup, 6-cup, and 8-cup Chemex models should be enough to cater to your needs. The 6-cup and 8-cup models, in particular, are pretty handy for households with more than one but less than four people. But if there are over four coffee drinkers at your place, or if people often crash into your house, the 10-cup model Chemex would be an excellent choice. This, however, is only an objective answer.

At the end of the day, the correct answer to the question, “What is the best Chemex size?” largely depends on your personal preferences. Just remember to consider both your price and your needs.

Now you might be wondering, what’s so hard about choosing a Chemex size? Well, although it may seem pretty simple at first, there are actually several types of Chemex, and each one varies in its available size.

If you’re on the lookout for a Chemex, you’ll find that a lot of guides mention the term “handblown” and “classic.” These are actually the two main types of Chemex. Up until now, we’ve been discussing the available sizes for classic Chemex, but there’s also a handblown variety. A handblown Chemex is essentially a model that was hand-produced by a professional glassblower, hence the name.

While they are two different types, you must remember that a classic and handblown Chemex is still the same device. Therefore, they still have several similarities. Examples include the following:

The following are some of the differences between the handblown and classic Chemex:

As you can see, one of the differences between the two types is their available sizes. This is perhaps one of the main reasons why people get confused when choosing the best Chemex size for their specific needs.

With that said, make sure you choose between these two options before deciding on the size.

Speaking of which, once you decide on the size, you might struggle to brew coffee with the Chemex. So, the following section should help you by discussing the best grind size for a Chemex model.

What Would Be The Best Grind Size For A Chemex?

For those who don’t know, grind size refers to the size of the individual coffee grounds you put into a coffee maker. The perfect grind size changes based on the type of coffee maker you’re using and the results you want to achieve. For your reference, here’s a list of grind sizes you may choose from:

The grind size is essential simply because it affects how the machine will extract and brew the flavor from the coffee beans and into the beverage. And if you’ve ever listened in your science class, you should know that the size of the particles involved in a chemical process may affect the output. This is particularly true for Chemex models as they can be a bit unforgiving. So, what would be the best grind size for a Chemex?

Ideally, you’d want to choose a medium-coarse grind, which should be similar to the consistency of salt, specifically sea salt. This grind size is best used in French press or percolators.

Chemex may not be the most popular brewing device right now, but it was actually trendy in the late 1990s. Perhaps it’s because the market has seen a lot more pour-over coffee makers recently, most of which are easier to learn than a Chemex. Fortunately, the product has been gaining traction lately, but seeing as how it’s challenging to get used to the device, it’s no wonder why it’s no longer as popular as before.

Nevertheless, with this guide, you shouldn’t have any problem using a Chemex, much less choosing the best Chemex size for your needs.